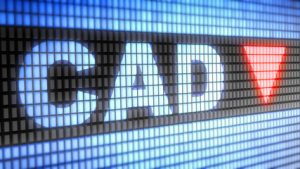 This morning, Stats Canada released disappointing figures showing that the economy barely grew in the final quarter of last year. Weakness in the oil sector was expected, but the downturn went well beyond the energy sector and bodes ill for a return to healthy growth this year.

The country’s economy grew by just 0.1% in the fourth quarter, for an annualized growth rate of 0.4%–the weakest performance since the second quarter of 2016, down from an annualized 2% pace in the third quarter and well below economist’s expectation of a 1% annualized gain.

Housing fell by the most in a decade, business investment dropped sharply for a second straight quarter, and domestic demand posted its most significant decline since 2015. Housing investment plummeted, falling at a 3.9% quarterly rate as the housing market continued to soften, with the most substantial decrease in new construction (-5.5% quarterly), followed by renovations (-2.7%) and ownership transfer costs (-2.6%). (*see note below)

Business investment in plant and equipment fell 2.9%, the sharpest drop since the fourth quarter of 2016.

The only thing that kept the nation’s economy from contracting was a build-up in inventories as companies stockpiled goods. Without a doubt, much of the inventory accumulation was unintended, as the slowdown in demand caught businesses by surprise.

Implications for the Bank of Canada

Canada’s economy has been plagued by trade uncertainties, reduced oil demand by the U.S., rising interest rates, and tighter mortgage credit conditions. Consumer and business confidence has declined, and inflation remains muted. Despite a relatively robust labour market, wage growth has slowed. The Bank of Canada is widely expected to stay on the sidelines next week when the Governing Council meets once again on Wednesday. The central bank’s latest forecast, from January, was for annualized growth of 1.3% in the fourth quarter, more than three times stronger than today’s reported pace of 0.4%. The Bank expects growth to decelerate further to 0.8% in the current quarter, before rebounding back to above 2% growth by next year.

The latest data puts the economy’s ability to rebound to more normal levels in question. Monthly data released today show the economy ended the year contracting, with December gross domestic product down 0.1%. Most economists now expect the Bank of Canada will refrain from raising interest rates for the remainder of this year.

*Housing investment in the GDP accounts is technically called “Gross fixed capital formation in residential structures”. It includes three major elements:
• new residential construction;
• renovations; and
• ownership transfer costs.
New residential construction is the most significant component. Renovations to existing residential structures are the second largest element of housing investment. Ownership transfer costs include all costs associated with the transfer of a residential asset from one owner to another. These costs are as follows:
• real estate commissions;
• land transfer taxes;
• legal costs (fees paid to notaries, surveyors, experts, etc.); and
• file review costs (inspection and surveying).

A new report hit my inbox yesterday written by Robert Hogue, a senior economist at the Royal Bank urging the federal government to withhold the expected support for millennial home purchases in the March 19th budget. Mr. Hogue writes that “Federal Finance Minister Bill Morneau is reportedly poised to unveil new budget measures to help more Canadian millennials become homeowners. While that generation does face housing-related challenges, especially in some larger and more expensive Canadian cities, we urge him to tread carefully. On the surface, ideas like relaxing the mortgage stress test, extending the maximum amortization period for insured mortgages, or increasing the amount of RRSP take-out for a first home down payment might bring short-term relief to buyers. But they do nothing to address what we believe is the root of Canada’s housing woes: gaps in the mix of housing options in some of Canada’s larger markets. Meanwhile, the measures won’t address the issue of high household debt, and may actually inflate home prices.”

The bank economist takes “issue with the notion that Canada has a home ownership problem in the first place. On average, more than 40% of Canadian households under 35 years of age own their own homes. And the proportion of all Canadian households who own a home is one of the highest among advanced economies. Even Toronto and Vancouver—the least affordable markets in the country—rank near the top of global cities on home ownership and have home ownership rates that are about double cities like Paris and Berlin. And despite a notable decline in the past decade, the ownership rate among younger households (Canada’s millennials) remains not only high historically in Canada but also compared to other countries, including the U.S.”

I urge you to read the report. The data provided in the charts are compelling. The real problem is the dearth of supply of “starter” homes in Canada’s most expensive cities. The measures likely to be introduced in the budget will not address the housing supply gaps and could well further inflate prices. “What millennials in Vancouver and Toronto really need is more inventory of homes they can afford, and a better mix of housing options—be it to own or rent…. At the very least, the collective goal should be to remove barriers (regulatory, administrative or otherwise) inhibiting home developers and builders to respond quickly to the demand for new housing—especially when that demand is rising rapidly.”

Chief Economist, Dominion Lending Centres
Sherry is an award-winning authority on finance and economics with over 30 years of bringing economic insights and clarity to Canadians.